Shreveport, LA – The City of Shreveport awarded KBA two projects at Festival Plaza shortly after opening our doors for business.  Two separate covered pavillions were designed and constructed in a three year period to complete the original Festival Plaza Master Plan.  Kevin Bryan is the original designer of Festival Plaza while employed at the last firm of record prior to opening his own company in 2001.  The City contacted KBA shortly after that to begin design on the two additional structures.   With its two large pavillions and public arena, this open air plaza in downtown is home to Shreveport’s Farmer’s Market, Red River Revel, Cork Wine Festival and a host of other public events. 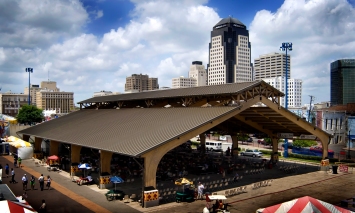